Skip to content
Home > Mobile App > How Spotify Was Developed: A Detailed Behind the Scenes Overview
Why SoftwareWorld is free?

Have you noticed how often you listen to music lately? And not on the bus radio, not from the speakers of the shopping center, but your mobile device. All thanks to the development of mobile technologies and the revolution of the accessible Internet. Another revolution was the launch of Spotify, as its stable subscriber base is the largest on the market and has more than 30 million subscribers. 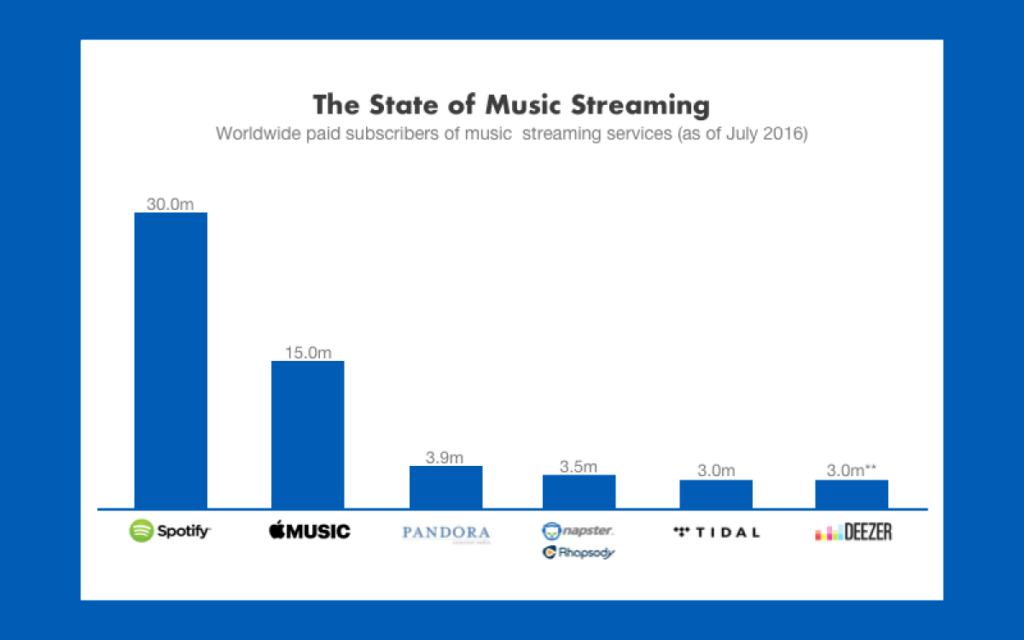 Now you don't need to store thousands of your favorite songs on your device. Now they are conveniently stored on the service servers, and all you need to listen to is headphones and a stable Internet. Such successes generate many questions, and the most common of them is how to create an application like Spotify. Since you are reading these lines, your startup idea is definitely gathered around the creation of a Spotify-like app. In this article, we will discover all ins and outs of the development process and reveal the main nuances of creating a Spotify-like app. Without further ado, let’s get started.

First things first, to create an application like Spotify, you need to study in detail Spotify itself and the idea behind it. The reason for this is that Spotify is very different from competitors in the market. Now, let's take a closer look at what's behind Spotify.

Spotify is a music streaming app that transmits music without delays, thanks to a peer-to-peer system. In simple terms, each user of the service is a separate microservice for interactive data exchange. For example, you started listening to your favorite track, but this is not due to streaming from a remote data center. Spotify searches for nearby devices on which this song is stored in the cache. The interesting point is that it is not necessary for one user to transfer the entire track cache. Spotify works by collecting chunks of tracks from multiple devices to completely eradicate playback delays.

Also, the application is simply riddled with artificial intelligence algorithms and analyzes your behavior inside it. For example, you start the first track from the Queen album, Spotify analyzes this, and while listening to the first track, begins to prepare the second one.

As you can see, Spotify has a lot of features and differences that distinguish this streaming music service from its competitors. However, let's move on to the most interesting part of our article, namely developing an application like Spotify.

The development of this kind of application is a rather complex process that consists of many steps. In order to avoid mistakes in development, you must know in detail about them. This will save you from wrong decisions and prevent various pitfalls that may arise along the way.

The first thing to think about when you start developing a Spotify-like application is music licensing. Without this aspect, you cannot even launch such a service in countries where copyright is closely monitored. For example, if you are going to run your application in the United States, you must obtain Public Performance Rights from The American Society of Composers.

Or if your entire target audience is located in Europe and you are going to launch the application there, the process will be a little more complicated here, since you will have to contact each participant of the European stage and personally request the rights to use the music in your streaming application.

Once you have obtained the rights to use the music, you can begin the application development process.

Thinking through the design is an extremely important part of development, as it gives you a more accurate view of what the final product will look like through this process. In addition, your design concepts will serve as a great base for developers, as they will get a tangible prototype of the application they need to create.

However, if you are not great at design, you can leave this process to the company for the developer. In this case, the entire design process will consist of three sequential stages:

The work on the app design takes a lot of time, and the more complex the app and the larger number of screens in it, the more designers are involved in the development.

We have analyzed in detail the idea behind Spotify. Now is the time to consider the features that make up the key functionality of this application. We will discuss each feature in detail to grant you a full list of must-have features for a Spotify-like app. 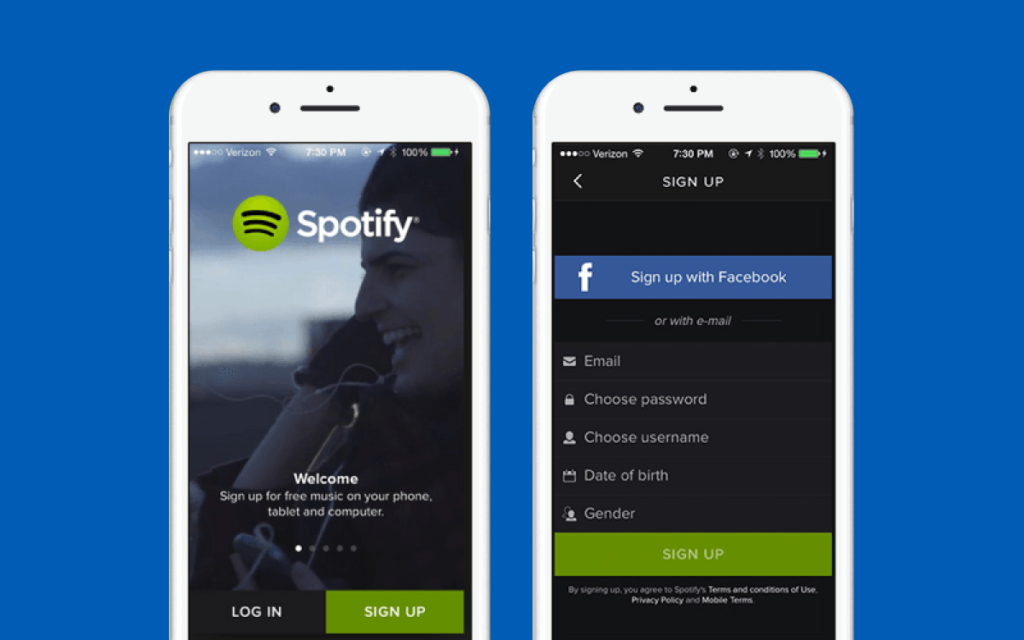 In the Spotify application, the user profile also plays a huge role in the user experience. The user, through this function, can create playlists, sort them, open access to them for friends, and much more.

Excellent addition to this feature is the ability to log in not only through a standard username and password but also using social networks and Google login feature.

The main function of Spotify is very different from the usual download of tracks. While this approach provides high-quality music playback without lag, it can take time and require a good team of people to implement this functionality.

First of all, to ensure the high quality and speed of streaming music, you should consider the following factors:

During development, all of these factors are selected separately, and the choice often depends on the platform that the application is targeting. If you are going to release your application on the Android platform, then you can choose between RTSP, SDP, HTTP, HTTPS protocols, and among the audio codecs, you have a choice between AAC LC, HE-AACv1, FLAC, and others.

So our humble advice is that you should carefully study the features of the platform before choosing which platform you want to create an application for.

Flexibility and many features are what attract many to Spotify. When developing such an application, you should create a list of everything that the user wants to do with the tracks within the application. Add a search bar, the ability to shuffle your favorite tracks, create playlists, group tracks by artist, genre, album, and much more.

However, how do you implement some of these features? For example, to sort songs, you need to connect the server-side of the application, which handles the internal logic, while the client-side processes the playback of the tracks.

On the IOS platform, such functionality is implemented using the AVAudioPlayer class, while on Android, special multimedia platforms are used.

Don't forget about social functions. Spotify in its arsenal has many functions that are designed to bring people with the same musical tastes and not only together. In order to make the application as friendly as possible for people who like to socialize, you should think about introducing the following list of features:

This set of features allows you to make the application much more flexible and will work great for passive advertising. At the same time, some functions can be made part of paid or premium features. We will talk about the monetization system a little later.

Push notifications are an important element of an application's user interaction, and it is difficult to find an application today that does not have this feature.

However, when introducing such functionality, it is worth doing it wisely. Not all users are thrilled if the application is bombarded with hundreds of notifications per day for every little thing. Select the most important events about which you should notify the user, and do not forget to add an option to disable notifications for those users who do not want to see them.

The only obstacle to the implementation of Push notifications is the long development of such functionality. Nevertheless, in this area, there are tools that make it easier for developers to work, and they are different for each platform. While Google Cloud Messaging Service is used on the Android platform, Apple Push Notification Service is an excellent choice on iOS.

Even though Spotify positions itself as online music streaming application, it has the ability to listen to music offline. However, it is part of the premium subscription and is not available to free users. This function allows you to significantly expand the application’s audience since some users may not have constant access to the Internet. Imagine if a user wanted to listen to music on the subway or on vacation outside the city, and all that prevents him from doing this is the lack of the Internet. In addition, such a feature can generate additional income if it is wisely monetized.

To implement such functionality, developers often reserve part of the cache so that the user can save tracks to it and listen to them offline. In addition, local files are often used, which is a convenient way to determine which tracks can be listened to offline.

We are sure that you want your application to generate income, and Spotify is quite an interesting application in terms of monetization. In the free mobile version, the user can only listen to random tracks in a shuffle. At the same time, the number of skips is limited, and advertising appears between the tracks. 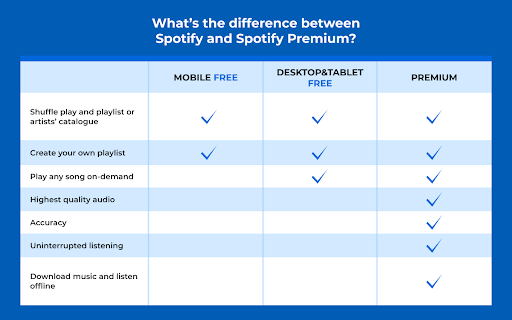 The free desktop version is more generous in features and already allows you to listen to on-demand tracks and create playlists. However, to unlock all the functionality of the application, users need to buy a subscription. Subscription opens all possible functions of the application, removes ads, allowing you to listen to tracks in the highest quality, and much more.

The development of a Spotify-like application is a rather time-consuming process, and you need to be prepared that the development will also cost a lot. We have prepared a small banner in which we will show you step by step how the final development price is formed.

As you can see, Spotify is a pretty interesting streaming app with its own set of features that distinguish it from the competitors. Even though Spotify is the most popular app on the market, you can still make an app like it, add some unique features and find your audience because now you know how to make a Spotify-like app.

Kate Orekhova is a tech writer at Cleveroad. A writer by day and a reader at night, she’s keen on technology and innovations. Her passion is to tell people about the latest tech trends in the world of IT.