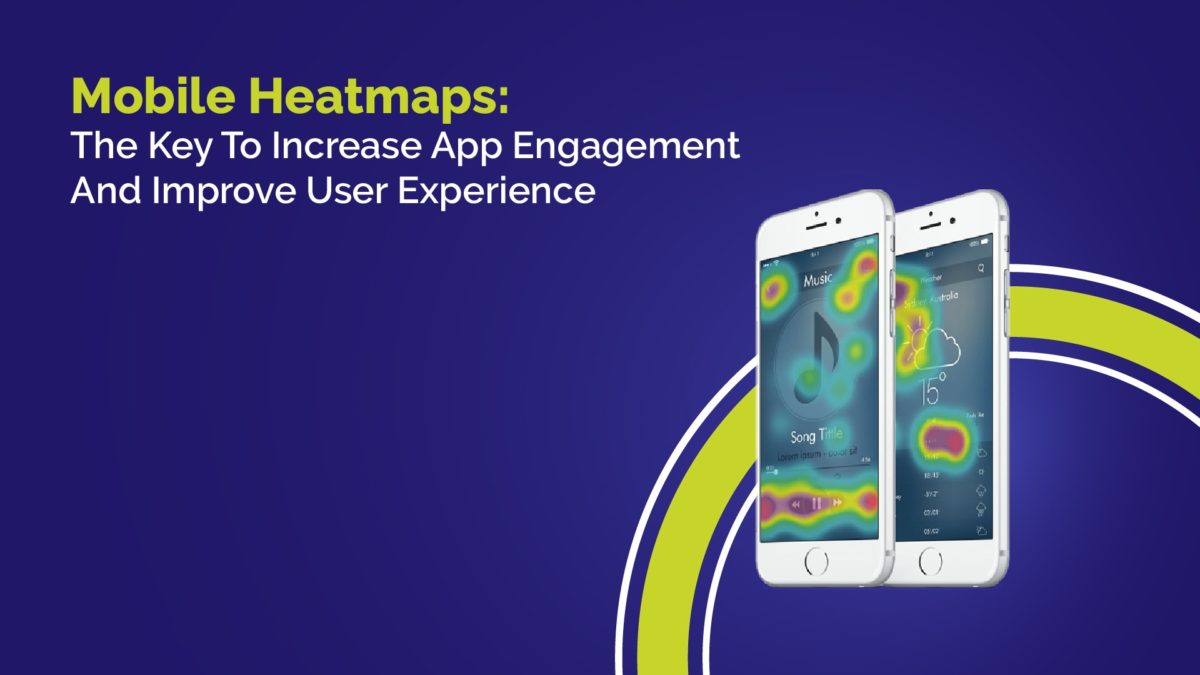 » How Do Mobile Heatmaps Work

» How Does One Read a Mobile Heatmap?

The success or failure of any product depends largely on its acceptance and usage by end-users. The same can be said for web and mobile applications. Developers rely on analytics to understand and measure user behaviour and acceptance of their products. Data from analytics however sometimes doesn't completely explain user behaviour. During such times, heatmaps can be used to effectively measure and map app usage, user’s demography, and geographical location. Heatmaps are a failsafe way to analyze app userbase.

The term heatmap was first trademarked in the early 1990s when software designer Cormac Kinney created a tool to graphically display real-time financial market information. Heatmaps originated in the 19th century, where manual grey-scale shading was used to depict data patterns in matrices and tables. Today, heatmaps facilitate data analysis and give a quick understanding of how people interact with a mobile application. Heatmaps help identify trends and aids in optimizing them for further engagement.

Mobile heatmaps accept the input in multiple ways, unlike web heatmaps which receive input through clicks alone. Heatmaps for the web, accept input which is either left clicks or right clicks of the mouse button. Mobile heatmaps are slightly more complicated as they receive inputs through various gestures like a tap which is either single or double. There's a touch gesture of swiping left, right up or down. One more gesture is zoom, where users pinch their mobile screens to zoom on any part. The ones mentioned here are simple gestures. There are more complicated gestures that are not collated or recorded as every mobile user has a unique relationship with their device; hence unique gestures are a common phenomenon. Analysts, therefore, have to identify gestures that are unique and yet provide some sort of input and gestures that are unresponsive and hence invalid.

Heatmaps collect voluminous data and compile them for swift review. Heatmaps are best used in large groups of data where they show us spots of high activity or no activity. Using heatmaps one can find out which elements get the most attention. They are a fantastic tool that helps in increasing conversion by optimizing the user interface, creating a better user experience, and ultimately encouraging users to use the app while saving time, money, and headache. Analyzing heatmaps also allows analysts to show the intuitive nature of UX design. Heatmaps are a method in between qualitative and quantitative methods of analytics. 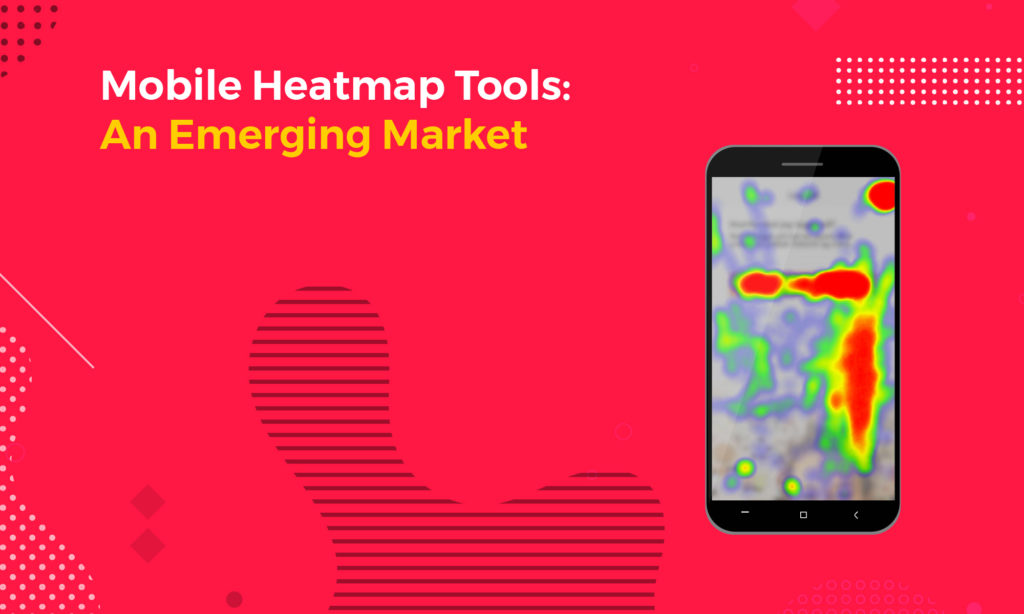 The heatmaps market for websites is saturated with many players providing analytics services. This is in sharp contrast to the mobile heatmaps market where a handful of platers offer services. The three leading players are UXCam, Appsee, and UserExperior. Let’s see what services these companies provide.

› Appsee: Appsee’s in-app mobile analytics platform tracks every interaction of the user with your app. One of the best features of the Appsee is its ability to show what exactly users are doing in one heatmap and also, generate heatmaps of unresponsive gestures. With session recordings, touch heatmaps, and analytics, analysts have a window into the mind of the user. This tool got acquired in 2019 and it’s not possible to use their service anymore.

› UserExperior: This is a relatively new Indian analytics firm that makes detailed heatmaps. It can track each user session uniquely. The best part is all this is done without invading users’ privacy. However, being a new firm, it still has to prove itself as a reliable player.

» How Do Mobile Heatmaps Work

Heatmaps represent the average user activity, allowing analysts to see exactly where users are focusing and where product analysts should be looking. The UXCam captures every interaction on an app by saving all gestures in their respective screens. By identifying user behaviour minor changes can be made in the design of the app which translates to more user engagement and positive reviews for the app. It's important to have a call to action (CTA) that is seen and used by app users. That's possible only if analysts study user behaviour closely. Few companies that are using mobile heatmaps to drive up their user engagement are NBC, Nissan, OLX, Baidu, Task Rabbit, Grupo Planeta among others.

Creating mobile heatmaps is a challenge since UXCams to account for different types of development platforms (Native, React Native, IONIC, etc). Also, tracking heatmaps on websites is easier as it is the same always. In mobiles, however, the same app can be different for iOS or Android smartphones. Infinite scrolling phenomenon also poses a challenge in collecting data for mobile heatmaps. 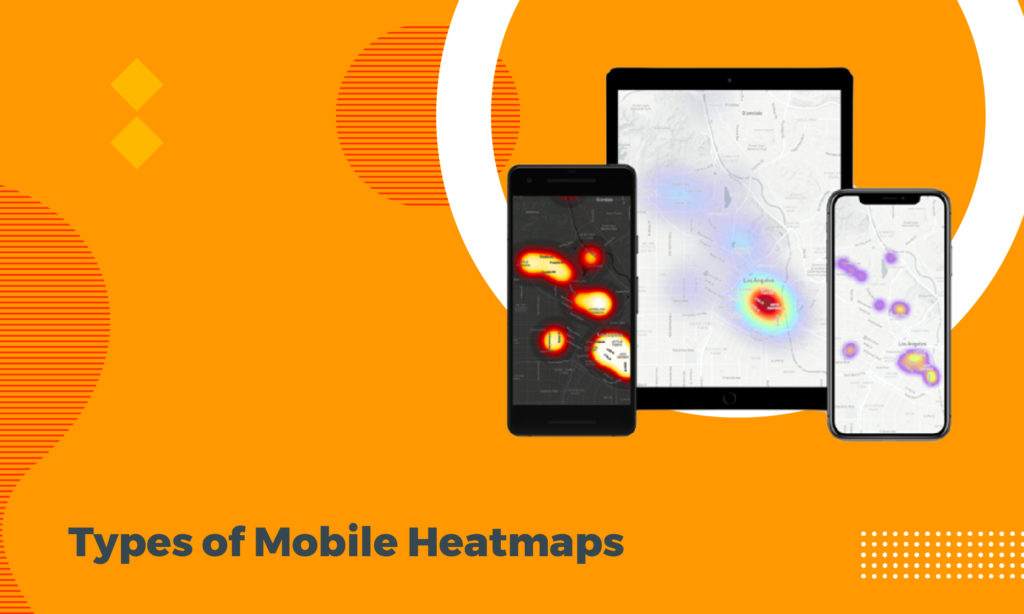 Various gestures and input styles have led to the identification of various kinds of heatmaps. Let's take a look at a few of them.

› Rage Tap Heatmaps: There are times when users try to tap on a link or a specific area of an app expecting results or to see the response. If nothing happens users have a habit of tapping repeatedly and still if no response is observed, then they exit the app or force close it. This behaviour is called rage tapping. Users are frustrated due to lack of response; in rage tapping, one can notice 2 taps within a certain radius of the screen, and at most 500ms between consecutive taps.

› Unresponsive Gesture Heatmaps: When a user taps or tries to elicit a response from a non-functional area of an app is called unresponsive gesture. An element is touched, but it’s not an interactive element. In layman’s language – frustrated user trying to navigate through the app that seems poorly designed causing a question on apps usability and retention.

› First Touch Heatmaps: Human beings form a very quick first impression. The first touch heatmaps help analysts get a note about the points where users are tapping when they first see the screen.

› Last Touch Heatmaps: Very insightful for those who are trying to build a user-friendly and engaging application. Last touch heatmaps show where the users left the app, making an impression of it.

› Device Heatmaps: When you develop a mobile app, a large number of devices and device sizes that you need to test for is a challenge. If product analysts look at heatmaps for specific devices only, it is possible to identify issues that are caused by specific smartphones.

› Landscape and Horizontal Heatmaps: Great possibility that users will not use the app in landscape mode, as most of them prefer to use the app in horizontal mode. So, you can adjust the heatmap accordingly and take note of the difference when they flip it.

» How Does One Read a Mobile Heatmap? 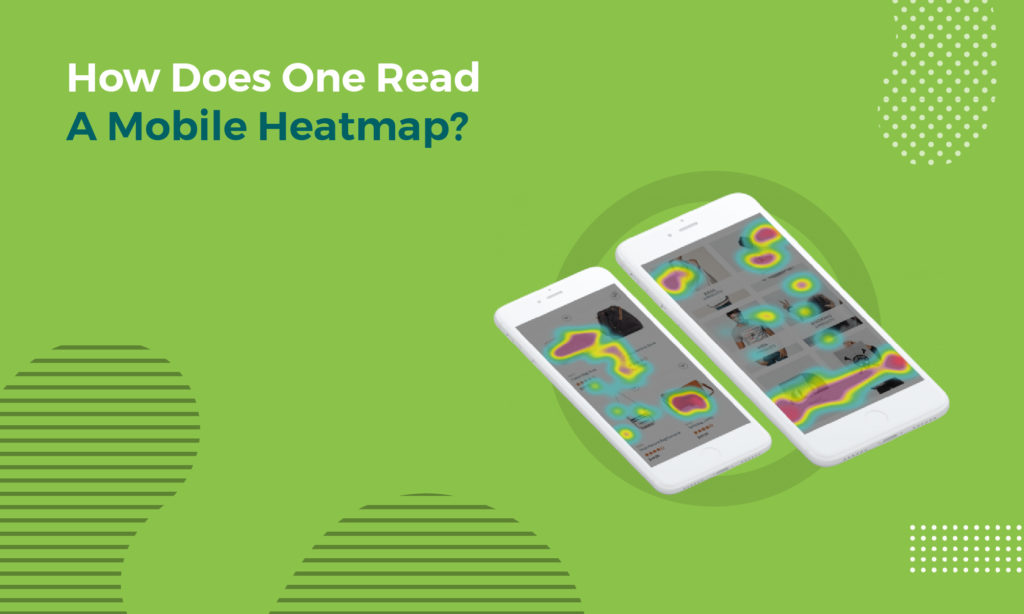 Understanding heatmaps is crucial and a lot depends on an app's success if the heatmaps are read right. Here are important guidelines to consider when reading heatmaps:

Heatmap analysis happens through a recording tool such as mouse tracker, eye tracker, and cameras. The analysis briefs the eye movement or mouse movement while the user is using a product or a service. Heatmaps analysis gives a concrete idea on which aspects of digital and non-digital products needs to be improved.

Collect ample data before reading or analyzing heatmaps. Experts advise collecting usage data of at least 2000 app users before analyzing their usage behaviour. Fewer data means basing the analysis on a few individual users that are not representative of all users. If features are adapted to a few users, changes made to an app could be counterproductive.

One can never be sure of a user's motive to use an app as analysts are not present beside them at that point in time. A partial analysis or simplistic explanation could be right about their app usage. However, it can also backfire. Segmenting data can help resolve the issue. Some of the common distinctions are gesture type, app version, size of the device, OS version, first and last tap.

Comparing heatmaps before and after analysis and changes made helps app developers to see if the desired changes are bringing out a positive reaction from users.

Let's take a look at some of the analytics methods that are compatible with heatmaps:

› Session Replay: Heatmap vendors for web and mobile provide session replays as it is gesture-based. Session replays help in gaining context as to why a user performed a specific gesture on the app at a given time.

› Screen Flow: Screen flows allow analysts to understand the big picture of your app. The advantage of this analytics method is that you can easily spot unusual flows that you can look into with heatmaps.

To comply with relevant privacy and GDPR, app developers need to responsibly manage any user data that is collected. Having a set of compliance rules can help analysts in this regard. All personally identifiable information must be anonymized on the end user's side on all heatmaps. Adding form suppression filters and having a built-in compliance feature can help data analysts remain GDPR-compliant.

Ayush has been a thought leader in AppClues Infotech. He is a quintessentially hardworking and passionately talented leader. With the experience of almost a decade, Ayush has helped dozens of businesses achieve technological advancements by leading their projects.